REC can look back to a record year in sales. According to the newly released Solar Market Insight report for Q4 and full-year 2016, the Norwegian company achieved a 9 % increase compared to 2015, with more than 1.26 GW of solar panel shipments. What is more, Q4 2016 was also one of the strongest quarters for sales volume in REC history (349 MW).

Europe, led by Germany, the UK and the Netherlands, remains an important market. In 2016, REC shipped a total of 406 MW to the EMEA region (Europe. Middle East and Africa). In Germany, known as a trendsetter for its use of renewable energies and high quality standards, REC doubled its market share to 13 % (200 MW).

The Americas remains REC’s strongest market globally. In 2016, 665 MW of REC panels went to the USA. This equals 53 % of the worldwide shipments, thus helping maintain REC’s position as #2 most popular brand of solar panels for private homes in the United States.

According to REC’s conclusion, the strong performance can be attributed to the company’s innovative and expanded product lineup, a high quality standard and efficient industry-leading production operations. In addition, external factors, such regulatory changes in various markets in 2017, contributed to the year-end rush and, thus, to the company's success in Q4 2016. 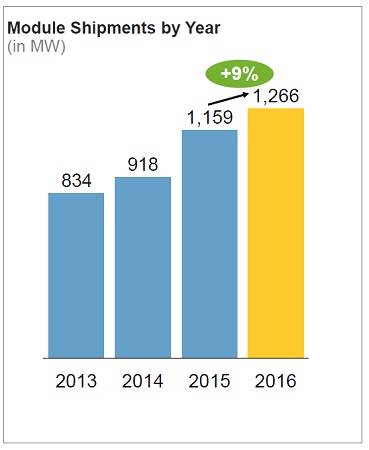